The scourge of Japan

In 15th century feudal Japan there was a covert group of mercenaries who were thought to be  the most dishonorable warriors in the land.

The noble class of Samurai looked down on these fighters as the scourge of Japan.

They were called “Ninja.” 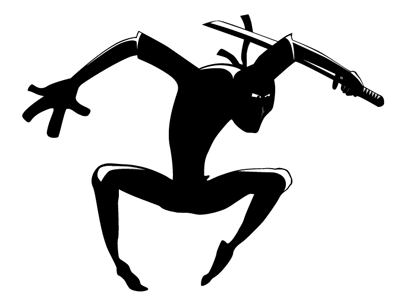 Keep that in mind while I tell you this next story.

Yesterday I posted in a private members only Facebook group for some feedback on a new sales funnel I'm working on.

While I was waiting for the moderator to get back to me with some feedback I got a comment from a guy telling me that I shouldn't use words like “Close” and “Push” because they are bad.

For a split second I thought I might need to adjust how I was thinking.

Then I decided to click through to this guys profile to have a look.

Imagine my surprise when I see his business name has “Ninja” in it.

When you hire this special breed of fool he will infiltrate your wallet, sabotage your business, and assassinate any chance you have to succeed.

First, do some research before picking a name.

Second, watch who you're taking advice from – they may be out to kill you.

I wanted to give you a heads up about the next Podcast Mogul Newsletter.
It goes to the printer soon.

Inside I'll tell you the story of when I joined a cult and how me and some friend broke free and ended up in the jungles of Costa Rica with a wise man who shared a secret with me that has improved my life 100 fold since I started using it.

Plus, I give you the exact steps to follow to put this secret to work for you in the next 30 days.

All that and a ho' bunch more inside the next Podcast Mogul.

Jonathan Rivera runs the most respected and trusted Podcast Agency in the world.

He helps professional business owners establish themselves as leaders in their community. He does this with a mix of digital media and old school Direct Response tactics.

The clients he works with are improving the lives of millions of listeners daily by empowering them, inspiring them, and leading them to the change they desperately seek. He has authored two books on Podcasting:

Next post: Sittin On A Park Bench In Santa Margherita