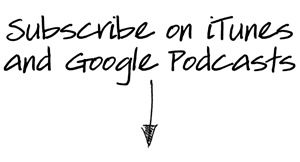 It’s easy to sabotage yourself after you fail.

But the most successful people know the secret that not only prevents them from self-destructing, but also helps them use their failures as a springboard to success.

Today, I’m sharing those secrets with you.

Are you a highly-driven dad who needs help creating your legacy? Then go to wherever you listen to podcasts, subscribe to the show, and leave a 5-star review to help other highly-driven dads find this show.

No don't go in there, Daddy's working.

Jonathan: This, friends, is a tough, tough day for me and I've totally failed and I came so fricking close and it was so hard to admit this, and I wanted to hide it from everybody and just pretend like everything was good, but it's not. You're hearing some background noise, of course - I'm coming to you from the Expedition studio, beaming down the 408 eastbound towards the sun at 70 miles per hour. Welcome back to another edition of "Daddy's Working." [0:01:05.9]

I am daddy and today I am driving to the studio to do some work and I had a really tough moment this morning. It was hard for me to realize what I had done, and when I noticed what I did, I started trying to lie to myself and I started trying to hide it and the thing is that I can't… like lying to myself is not going to work because I know the truth and lying to you and hiding it from you is most certainly not going to work, but this morning, as I was on my morning walk for 75 Hard, today would be day 67, I realized something. I failed. I didn't make it. Sixty-seven, sixty-seven. I was almost there and what I realized was I did not take a selfie yesterday. Of all the things in the world - I've gotten all my workouts. I've done all the eating right. I've had my gallon of water every single day. I didn't take a selfie yesterday. [0:02:09.9]

My schedule was a little screwy and I changed things around and went to work out later and just totally forgot about the picture, and I would have used any picture. If Cupcake took a picture of me, I would have used that. If I did a video, I would have used that. But no pictures taken yesterday; therefore, I failed, on day 67 of 75 Hard. So fricking close, and I realized it this morning - as I'm walking around, I'm like, I'm not going to tell anybody. It's just one picture. What difference will it make? It does make a difference. It makes a difference to me. Anytime I say I completed it, I'd be lying, and so I'd live a lie and it's such, such a little thing that you could overlook it, but it's often said that how you do one thing is how you do everything and I am a man of integrity and I can't lie to myself and I can't lie to you. [0:03:00.6]

I failed and I really, for a second I got into that mindset where it was like, oh screw it - I'm going to eat some donuts and I'm not going to work out and screw it - let me just…if I'm going to…if I'm going to mess up, I'm going to mess up big time. If I've got to start all over again, I may as well have fun. That only lasted a second. The first thing I did was I popped on an Instagram Live and told everybody that I failed. That way, it was out in the open, and when I got back to the condo, I told Cupcake, "I failed," and I told the boy, "I failed." And I'll live with that. I failed. But then I went and took a picture of myself anyways, and I'm like, man, failure looks pretty fucking good. It doesn’t look bad at all. Down 12 pounds, down like 8 or 9% body fat. In the last two months, I've read 13 or 14 audio books. My bank account is fatter. I've got more energy. So if this is what failure looks like, I'm going to be alright. [0:04:06.9]

That's how I built myself back up and what I've decided, so you guys know, is a lot of people in this world, they start things and with New Year's right around the corner at the time this recording is going out, people are doing those New Year's Resolutions and planning what they're going to do better next year. Everybody, everybody likes to start things. Starting is easy. Anybody can start. What separates the players from the posers is finishing. How many of you finish what you start? That right there is what's going to separate you from the rest of the pack. So here's what I came up with. Number one is I am going to finish. So I'm on 67. I got eight more days. I'm going to finish. It's going to be like that Babe Ruth * - 75 Hard * because I missed the one picture. But I'm going to finish because I've come this far and I'm not going to just put it all away and start all over again, not yet at least. [0:05:05.6]

I've been so proud and I'm a failure. So I knew to dig myself out of that, I had to start looking for lessons. What's the lesson here, and the first lesson is one that I want to share with you is that it was getting too easy. At day 67, it was getting routine. I was just taking it for granted, pounding the water, doing the workouts, eating what I needed to eat, reading what I needed to read. It was getting easy, so I began to coast and go on autopilot and not review the checklist, not make sure that I hit everything. Because all I had to do was, last night, go pop a quick picture. If I reviewed my checklist, I would be fine, but I was coasting. I was taking things for granted, and that's something that we all do. You get good at something, it seems easier, and you get sloppy. I got sloppy. [0:07:05.9]

It cost me 67 days. I am admitting that to myself right here. I am admitting it to you, but let's use that as a lesson - even when you great at something, you still got to review the fundamentals. You still got to review. You still got to make sure that you're hitting the mark or else, you're going to hit a speed bump, something's going to get in your way and it's going to derail you, just like what happened to me yesterday. So, I think I'm going to keep this one short. I don’t want to beat a dead horse here, but this is … man, it's a blow to my ego, which I think, if you're stoic, you shouldn't have ego - apparently, I'm not stoic yet. I do have some ego. I did have some pride in that, but it gives me a chance to do it all over again. Do it harder. Do it better. And finish. Again. Finish completely next time. [0:08:02.3]

I'm going to finish this one. So I…I mean, there's a few lessons in here for you, and it's number one - you get good at something, you start coasting and you might miss the fundamentals. Don’t do it. Remember to check in. Check out. Make sure that you're hitting your marks. Number two is you can't lie to yourself. You will always know the truth. And so, I'm being upfront with you. I'm telling you what I'm doing about it. Number three - finish what you start. So many people in this world start so many things and they don’t finish. They do not finish, and even though I've been derailed here, I'm going to finish this - 75 Hard, just got eight days left, and then I'm going to come back for 75 Harder. That's it. That's what I've got for you today. I will ask you for one thing and one thing only - if you got value from this, if this has helped you, share it. Talk about it. Post it to social media. Other people need this message. Do not be greedy. Daddy's out.

Next post: EP 18: Social Media – A tool or distraction? Answer may shock YOU?